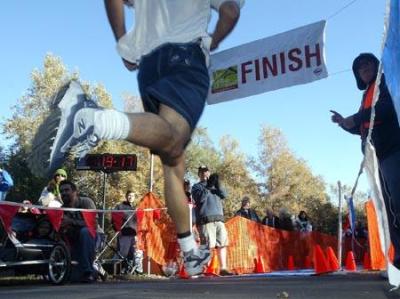 On a brisk Thanksgiving morning, 1,864 people warmed up by exercising during the Second Annual Jesus Center Run for Food.

The winner of the 5K race was Nate Ogden, of Chico, who crossed the finish line with a time of 15:46.

Ogden, a former PV High student, runs for Brigham Young University and is visiting his family for the Thanksgiving holiday.

The race began at One-Mile Recreation area and looped through the park, finishing near the restrooms at Sycamore Pool.

While there were many obviously competing to win the race, or place a personal best in the run, most of the participants walked as groups, with families, strollers and friends.

The community event was also a boost for the Jesus Center with funds helping to feed the homeless six days a week in Chico throughout the year.

The run/walk is a fundraiser for the charity, and participants receive a T-shirt.

Estimates are that $60,000 was raised, which is a small portion of the charity's annual budget.

Racers were awarded for first and second prizes for male and female in different age brackets.

Jesus Center Executive Director Bill Such said the event has really taken on a life of its own.

In addition to being a fundraiser, Such said the event seems to be embraced by the community. People really seemed to enjoy getting out into the fresh air and enjoying their friends and family at the event, he said.
About 100 volunteers help set up the event, including taking registrations, leading the path of participants, announcing awards etc.

The competition factor carried further than just the initial winners. Pairs and groups of runners continued through the end of the race, picking up speed and competing with the pack with whom they were running.

Brad Hall, 18, and his dad Don, 51, were racing one another, with mom Pam waiting with the camera at the end of the race. Their family friend Matt Schott, 24, also took part in the race while visiting from San Diego for the holiday.

Brad's brother Brandon, 24, had run ahead of his family, finishing 10th overall.

Charles Brooks, of Paradise, chose to run the event carrying a full-sized American flag. Brooks is not a veteran himself, but after the race a veteran approached Brooks after a photographer snapped his photo and told Brooks he appreciated that the flag was part of the event.

"It was great following you," the veteran said.

Others in the event took an athletic jog, including several who made the trek while pushing baby strollers.

Most, however, took a more leisurely pace, chatting with family members and providing a long line of walkers.

The idea for the event came from Michael and Janine Reale, who have family in Fair Oaks and participate in a Thanksgiving run in the Sacramento area each year. They thought the event would also be a success in Chico. They were right.

Staff writer Heather Hacking can be reached at 896-7758 or hhacking@chicoer.com.