Menu
Articles » Run for Food gets a leg up from thousands

Run for Food gets a leg up from thousands 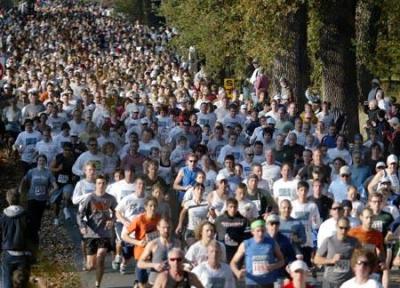 CHICO — A startlingly large crowd of runners packed lower Bidwell Park Thanksgiving morning, working up a hunger in the fight against hunger.

It was the third annual Run For Food, a benefit for theJesusCenter, and it was huge.

More than 2,600 runners paid $25 to $30 each to make the five-kilometer run. The number participating looked to be double that, though not all were formally registered. Waiting for the start, they packedSouth Park Drivefor more than a quarter-mile, about 15 across.

Two-thousand six-hundred registration forms were printed, which wasn't enough. "At the end, people were just throwing money on the table," said Michael Reale, who with his wife Janine organized the race.

"It shows that even though the economy sucks, people still want to give," Reale said.

Jesus Center Executive Director Bill Such was wide-eyed at the starting line.

"I'm so excited to be part of something accepted by so many Chicoans. It's a good, wholesome, enjoyable event," he said, and went on to comment on the festive atmosphere. "Next year we need a mariachi band."

The participants were a mixture of serious runners and people out for a jog or a walk for a good cause. There were infants in strollers, people in costume or wearing turkey hats, and a number of dogs. Such said he saw one dog with a runner's number attached.

It took 7 1/2 minutes for the participants to clear the starting line after the horn sounded. The first runner crossed the finish line just eight minutes later.

Topping the men's division was Nathan Ogden, 23, ofChico, who finished in 15 minutes, 30 seconds. His sister Kristen, 27, also ofChico, was first among women with a time of 19:07. The siblings won last year's event, too.

Serious runners wore a electronic chip around their ankles, which allowed their times to be captured by a computer. Times were expected to be posted at www.runforfood.com as early as Thursday evening.

Among the runners was city councilor-elect Jim Walker, who said he finished in 28 minutes, 27 seconds. "I had to train a long time to run this slow," he joked. "This is such a great Thanksgiving event. You see friends and family and support a great cause."

This year, Andy and Mimi Miller were joined in the running by their children, Benton, 11, and Cora, 9. It was Cora's first time. "It was tiring, but fun," she said.

"There are lots of good reasons to do it," said Andy, including something extra special for this family — it was Andy and Mimi's 15th wedding anniversary.

"We have a lot to be thankful for," Mimi added.

City editor Steve Schoonover can be reached at 896-7750 or sschoonover@ chicoer.com.