It was a gorgeous, brisk autumn morning for the crowd of runners who trekked five miles through Bidwell Park, raising thousands of dollars to give back to the community's Jesus Center. 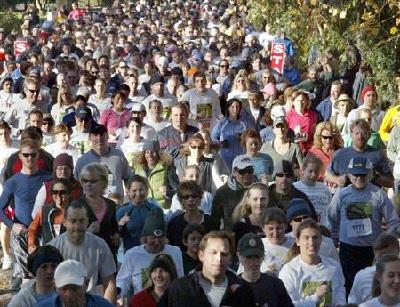 The turnout at One-Mile Recreation Area exceeded all expectations. Laura Cootsona, assistant director of the Jesus Center, said organizers expected a maximum of 300 people to show up for the fundraising event.

Runners ranged from youngsters to oldsters to toddlers bundled up in three-wheel strollers. The oldest entrant was 82, and one entrant was from faraway New Jersey.

Tamara Moores, 19, said she heard about the event at the Almond Bowl run and thought it was a great idea.

"I'm doing something I love -- running -- and am able to help supply those that are less fortunate," she said. "It's an awesome turnout."

One man admitted he wouldn't have turned out on Thanksgiving if it wasn't for such a worthwhile purpose.
"It's a great charity," said David Tuckness, 43, who was there from San Jose to run with his Magalia in-laws.

Tuckness said that after the run, he'd spend Thanksgiving enjoying the company of his family "and being thankful for all we have." And of course eating and maybe watching football.

The event came from the idea and hard work of Michael and Janine Reale, who patterned it after a similar event in Sacramento. The Reales have been planning for the run since summer.

Cootsona estimated more than $25,000 was raised for the Jesus Center, which provides meals for homeless people six days a week. She hopes next year that 3,000 people will participate. Event expenses and supplies were also donated.

As the crowd began the run -- or walk -- Monica Zachary said the event means community, helping those who are less fortunate and "just loving on them."

She said she was completely surprised by the size of the crowd, which included people who have benefited from the Jesus Center's help.

Among those who stayed behind waiting for the first runners to return was Jesus Center executive director Bill Such.

"We're absolutely flabbergasted," Such said. "The community support is really encouraging to all of us ... it's gone beyond our wildest dreams."

In just 15 minutes, the first runner returned, followed by more and more and more. The top two men and women to finish received awards.

And to Such, the run and the overwhelming response by the community is good for all.

"The way we help the least of us among us is a sign we're healthy."

Staff writer Barbara Arrigoni can be reached at 896-7757 or barrigoni@chicoer.com.